TASCC was first launched in 2011. It was developed for service providers working with high risk youth, such as those street-involved. TASCC was relaunched in 2016 to contain information for parents and service providers of youth with disabilities. In 2020, TASCC was redesigned with information for youth with disabilities. It also includes accessibility features and a learning management system, with online courses. TASCC was made possible through funding by the Maternal Newborn Child and Youth (MNCY) Strategic Clinical NetworkTM (SCNTM) and PolicyWise for Children & Families.

The purpose of TASCC is to provide a venue for youth, parents and service providers to access current resources and information that reflects best practice in sexual health education and promotion. TASCC offers practical tools and strategies for high risk youth and youth with disabilities. TASCC is a platform for online learning, a vehicle for knowledge transfer, and a sexual health resource for parents, service providers, and youth.

Sexuality is an important part of the overall wellness of all people. Although all Canadians have a right to sexuality education not all people receive it.

For Youth with Disabilities 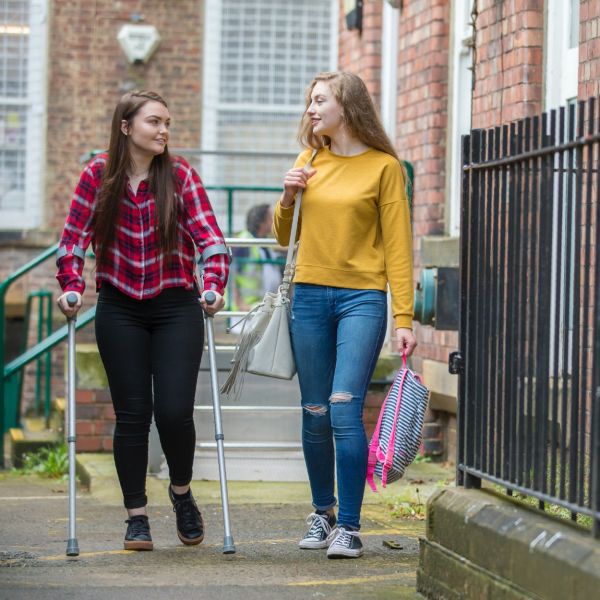 Youth with disabilities who do not receive sexuality education that is inclusive to their needs, are vulnerable to abuse, sexual exploitation, sexually transmitted infections (STIs), HIV, social isolation, and lower quality of life.1

In a study of parents and service providers of youth with disabilities, participants stated education opportunities and resources (e.g., interactive activities, games) are needed to support youth in their learning about sexuality.2 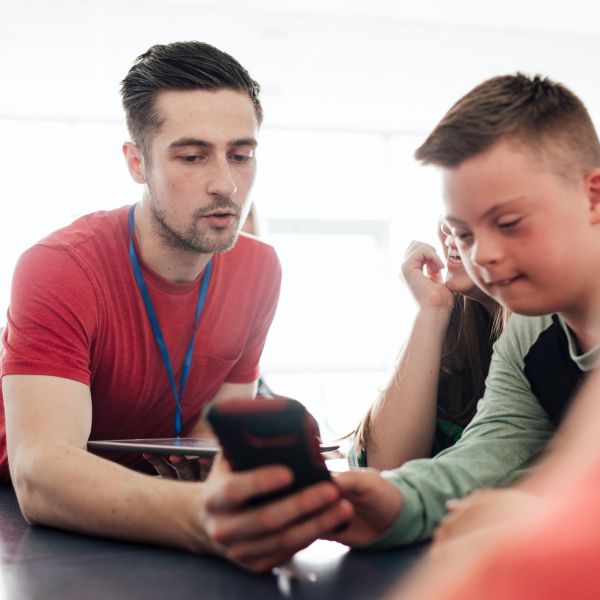 Youth with disabilities need support and understanding from their families and caregivers to transition through healthy development.1

However, it may be difficult for families and caregivers to fill this role, when they themselves need support. 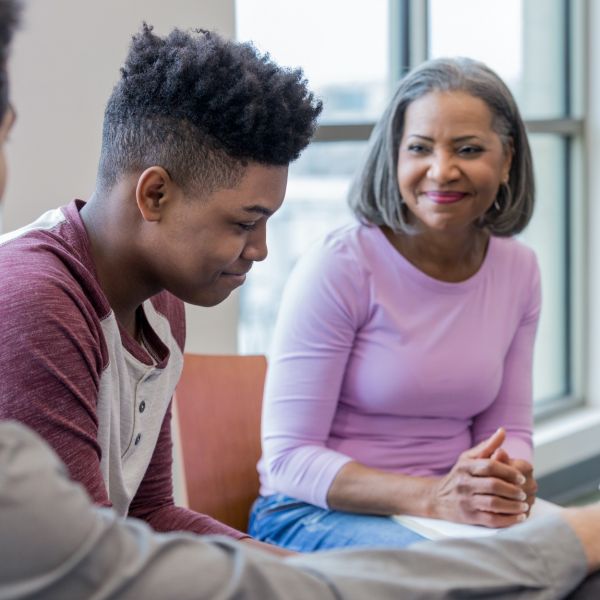 Most “mainstream” youth receive sexuality education in their home and/or school. High risk youth, such as street-involved youth, do not have this opportunity because many drop out of school or have no contact with their parents.3

It is important that those who provide direct services to youth outside of traditional school settings have the ability to address their sexual health concerns, or at the very least, refer them to somebody who can.

In a qualitative study of Calgary service providers working with high risk youth, participants said they need more information, resources and support to better assist the youth they work with.4

Categories (male, female) to which people are typically assigned at birth based on physical characteristics.

Sexuality5 is “a central aspect of being human throughout life, which encompasses sex, gender identity and role, sexual orientation, eroticism, pleasure, intimacy and reproduction. Sexuality is experienced and expressed in thoughts, fantasies, desires, beliefs, attitudes, values, behaviour, practices, roles and relationships. While sexuality can include all these dimensions, not all of them are always experienced or expressed. Sexuality is influenced by the interaction of biological, psychological, social, economic, political, cultural, ethical, legal, historical, religious and spiritual factors.” For more information, see the sexuality wheel.

Sexual health5 is “a state of physical, emotional, mental and social well-being in relation to sexuality; it is not merely the absence of disease, dysfunction or infirmity. Sexual health requires a positive and respectful approach to sexuality and sexual relationships, as well as the possibility of having pleasurable and safe sexual experiences, free of coercion, discrimination and violence. For sexual health to be attained and maintained, the sexual rights of all persons must be respected, protected and fulfilled.”

Sexuality Education6 is “the process of equipping individuals, couples, families and communities with the information, motivation and behavioural skills needed to enhance sexual health and avoid negative sexual health outcomes. Sexual health education is a broadly based, community-supported process that requires the full participation of educational, medical, public health, social welfare and legal institutions in our society. It involves an individual’s personal, family, religious, social and cultural values in understanding and making decisions about sexual behaviour and implementing those decisions. Effective sexual health education maintains an open and nondiscriminatory dialogue that respects individual beliefs. It is sensitive to the diverse needs of individuals irrespective of their age, race, ethnicity, gender identity, sexual orientation, socioeconomic background, physical/cognitive abilities and religious background.”

The Sexuality Wheel shows how broad the concept of sexuality really is. Each spoke of the wheel represents one part of who we are, all connected and influenced by each other. The spokes on the left show who we are by nature. The ones on the right show who we are taught to be. When all of the wheel’s spokes are in good shape, the wheel moves freely and smoothly; when all parts of our self are healthy, our sexuality is healthy. 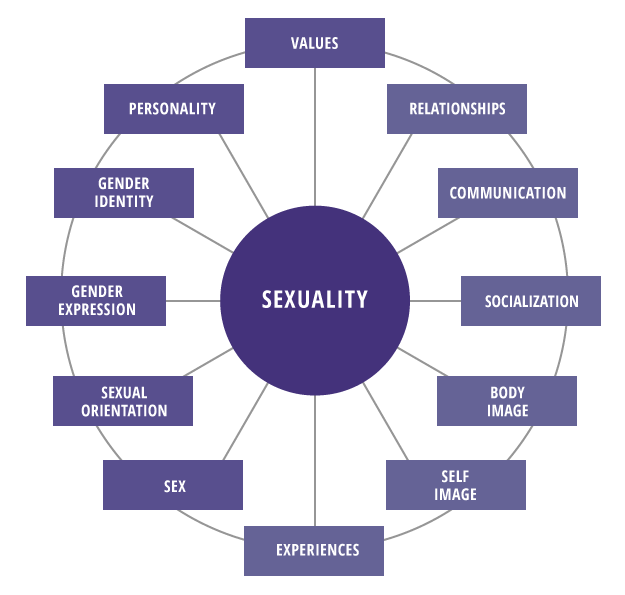 A set of ideas that people see as most important, a set of assumptions of how things are. Healthy sexuality is about consistency/congruence between values and actions.

What people have done, gone through, or been exposed to may be understood differently by different people. Personal experience forms the basis for values.

Qualities that make a person’s character uniquely theirs. Personality is the filter through which other aspects of a person’s sexuality filters through.

A person’s internal sense of identity as female, male, both or something else, regardless of sex assigned at birth.

How people connect and share information. Healthy communication is critical to sharing goals and ideas, setting boundaries and limits, and creating understanding.

How a person presents their gender. This can include appearance, name pronoun, behaviour, voice or body characteristics.

Learned behavior including culture, norms and behaviours that are acceptable to society.

A person’s emotional and/or sexual attraction to others. It can be fluid and may or may not reflect sexual behaviors.

The image a person has of their own body and how they feel about it. A positive body image often leads to healthier personal decisions.

Categories (male, female) to which people are typically assigned at birth based on physical characteristics.

What a person thinks of who they are. When a person has confidence and comfort with themselves, their bodies, other people and sex, they are more likely to have healthy sexuality overall.

The three main models used to inform this website are the Information-Motivation-Behavioral Skills Model, the Population Health Promotion Model, and the principles of primary health care.

The Information-Motivation-Behavioral Skills (IMB) model is commonly used to guide the development of sexual health programming.7 According to Fisher & Fisher,8 there is evidence that information, motivation, and behavioral skills are linked to performing sexual health behaviors.

The IMB model proposes that information regarding sexual health, motivation to take action on this information, and behavioral skills for taking action are essential influencers of the initiation and maintenance of “healthy” behaviors. According to the model,8 an “individual’s information and motivation work primarily through [their] behavior skills to affect behavior.”

The IMB model suggests that pertinent, practical, age and developmentally appropriate information that is relevant to the life circumstances of an individual is needed for implementing and maintaining healthy sexual practices.8

For additional information on the IMB model and how to apply it, see The Canadian Guidelines for Sexual Health Education: http://sieccan.org/sexual-health-education/

A low income 16 year old sexually active female can lower her risk for STIs and pregnancy by using condoms.

The overall goal of the Population Health Promotion Model9 is to improve the health of the population through a comprehensive approach. Population health is an approach that addresses the entire range of factors that determine health and, by so doing, affects the health of the entire population.
Health promotion is commonly defined as a process for enabling people to take control over and improve their health. Population Health Promotion explains the relationship between population health and health promotion.
It shows how a population health approach can be implemented through action on the full range of health determinants by means of health promotion strategies. Action needs to be taken on the full range of health determinants which include: income and social status, social support networks, education, working conditions, physical environments, biology and genetics, personal health practices and coping skills, healthy child development, health services, gender, and culture. 9

A comprehensive set of action strategies needs to be used to bring about the necessary changes. Action needs to be taken at various levels of society in order for change to be effective and accomplished. 9 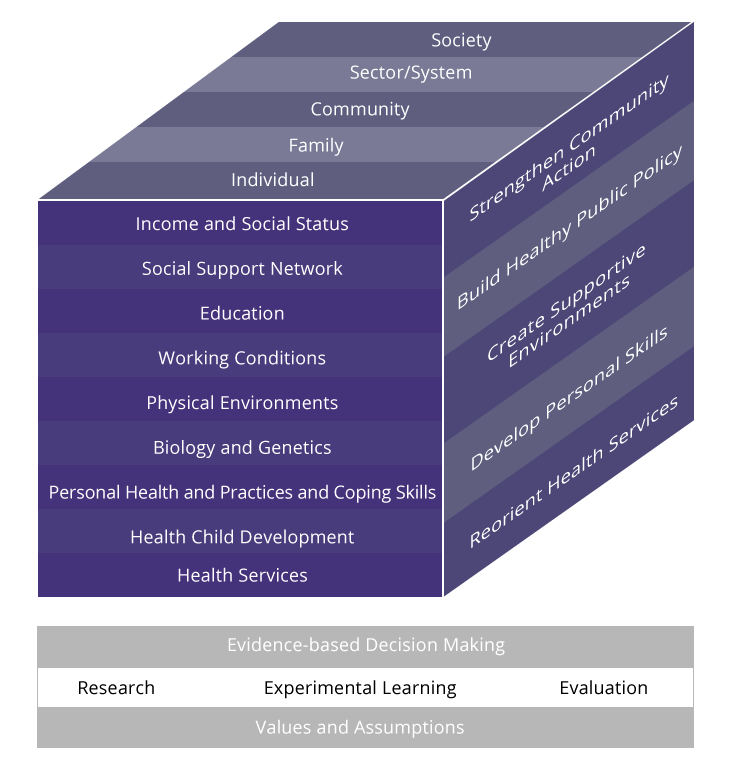 Primary health care10 is…
“essential health care based on practical, scientifically sound and socially acceptable methods and technology made universally accessible to individuals and families in the community through their full participation and at a cost that the community and country can afford to maintain at every stage of their development in the spirit of self-reliance and self-determination”

There are five principles of primary health care:

These principles are at the heart of public health practice and paramount to promoting the sexual health of high risk groups.

The TASCC.ca web site is for educational use about topics related to the sexual health of high risk youth and youth with disabilities. The site presents a broad range of information in order to facilitate the ability of users to make knowledgeable choices.

By using TASCC.ca, you acknowledge that you understand and agree that the information contained in or provided through this website is intended for general understanding and education only. This website is not intended to be and is not a substitute for professional medical advice.

DISCLAIMER FOR RESPONSIBILITY REGARDING LINKS TO OTHER SITES

Users are able to link from TASCC to many other sites that present information on sexual health. Although these links have been carefully selected, TASCC does not necessarily endorse the content of these sites, nor does it assume any liability for any information on those sites. The content of linked sites may change periodically and without notice.

As a user of this website, you have permission to use (display or print) the information for your own professional, non-commercial use, provided the information is not modified. If you reproduce any material, please request permission from TASCC.